Dark at the Top of the Stairs

In true crime noir style, two hard-boiled detectives investigate the apparently accidental death of a wealthy older man. Found lying dead at the bottom of the stairs in his expensive home, the only other person at home was his wife. While it looks like an accident, the detectives smell a rat. But, even when the crime is solved and the bad guys are wrapped up in neat packages, the story isn’t over.

Was it an accident or was it murder? Follow the investigation with detectives, Lou and Joe.

Dark at the Top of the Stairs is told from Lou’s point of view in classic noir detective style.

With dark humour, unforgettable characters and an unexpected twist at the end, this is a great read and ‘would be’ an excellent introduction to Elizabeth Horton-Newton writing.

I say would be, as I’ve previously discovered and read two of Elizabeth’s books! 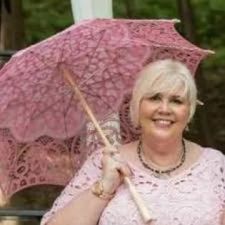 When I was seven years old my father gave me his copy of The Complete Edgar Allan Poe and The Complete Sherlock Holmes. I fell in love. I made up my mind when I grew up I would write horror and mystery books.

Then I hit puberty and decided I needed to toss a bit of romance into the pot. This was possibly a result of my sneaking peeks at my mother’s romances and rather naughty Victorian books, as well as Daphne du Maurier and Harold Robbins novels.

I write in every genre, but particularly enjoy stories with a solid suspenseful plot and characters that step off the page.

Most of the reviews of my writing have complimented my character development. In fact, I have been asked if they are based on real people. Let’s just say, maybe… I live in a hundred-year-old house with my husband, writer Neil Douglas Newton, and my pet familiar, Scout, with frequent visits from our four grown children, six grandchildren, and great-grandson.

Many of my story ideas come to me as I indulge my biggest extravagance, world travel. Next to traveling, my second hobby is photography.

I enjoy penning novels and short stories. Electric Eclectic provides the perfect “vehicle” to share my novelettes, longer than shorts and shorter than longs. These economical and quick reads give readers the opportunity to discover new authors.

What can be better than a short book that doesn’t break the pocketbook?